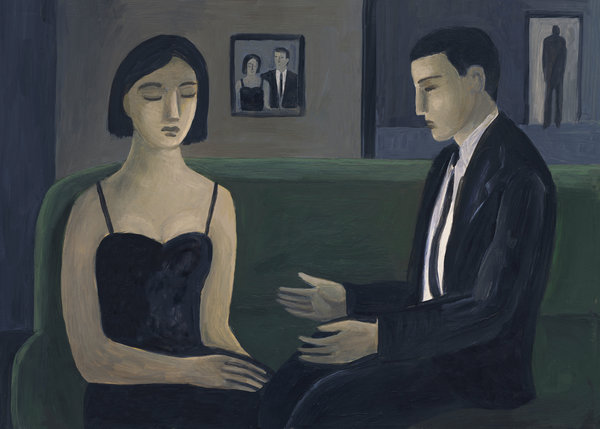 AS a psychiatrist I find that friends frequently seek me out to discuss problematic events in their lives; it comes with the territory and I’m usually happy to do it. But I was surprised and shaken to hear from an old friend that her husband of nearly 25 years had long been accruing and hiding from her a huge credit card debt (in the six figures). Even after divulging his secret, the husband had lied about the amount, with the sum increasing every time it was discussed. And right from the start, he refused to document where the money was spent. He left it for his wife to ruminate on, trying to puzzle it out. The disclosure wreaked financial and emotional havoc on their family.

After my initial shock at this unsuspected betrayal, I began to recall patients I had seen whose situations were not that dissimilar. They were people who had suddenly discovered that their life, as they knew it, was based on a long-term falsehood. They were people who might have stumbled across family secrets on the Internet or found old bills from a spouse’s long-hidden liaisons.

This predicament, a sudden revelation of new, pivotal information about one’s life, is the subject of many memoirs: Bliss Broyard, in “One Drop: My Father’s Hidden Life — A Story of Race and Family Secrets,” discovers shortly before her father’s death that his family of origin was black and that he had “passed” for white. Katha Pollitt, in “Learning to Drive,” writes about discovering the infidelity of her long-term partner. Geoffrey Wolff, in “The Duke of Deception,” unearths evidence that his father had lied about virtually every aspect of his past: his religion, education, career and military record.

But what if you’re not a writer and don’t have the option of metabolizing this kind of toxic experience through the process of writing? Most of us can’t seize control of the narrative by publishing our side of the story or get the sweet revenge of going public with the other’s misdeeds.

Discoveries of such secrets typically bring on tumultuous crises. Ironically, however, in my clinical experience, it is often the person who lied or cheated who has the easier time. People who transgressed might feel self-loathing, regret or shame. But they have the possibility of change going forward, and their sense of their own narrative, problematic though it may be, is intact. They knew all along what they were doing and made their own decisions. They may have made bad choices, but at least those were their own and under their control. Now they can make new, better choices.

And to an astonishing extent, the social blowback for such miscreants is often transient and relatively minor. They can change! Our culture, in fact, wholeheartedly supports such “new beginnings” — even celebrates them. It has a soft spot for the prodigal sons and daughters who set about repairing their ways, for tales of people starting over: reformed addicts, unfaithful spouses who rededicate themselves to family, convicted felons who find redemption in religion. Talk shows thrive on these tales. Perhaps it’s part of our powerful national belief in self-help and self-creation. It’s never too late to start anew.

But for the people who have been lied to, something more pervasive and disturbing occurs. They castigate themselves about why they didn’t suspect what was going on. The emotions they feel, while seemingly more benign than those of the perpetrator, may in the long run be more corrosive: humiliation, embarrassment, a sense of having been naïve or blind, alienation from those who knew the truth all along and, worst of all, bitterness.

Insidiously, the new information disrupts their sense of their own past, undermining the veracity of their personal history. Like a computer file corrupted by a virus, their life narrative has been invaded. Memories are now suspect: what was really going on that day? Why did the spouse suddenly buy a second phone “for work” several years ago? Did a friend know the truth even as they vacationed together? Compulsively going over past events in light of their recently acquired (and unwelcome) knowledge, such patients struggle to integrate the new version of reality. For many people, this discrediting of their experience is hard to accept. It’s as if they are constantly reviewing their past lives on a dual screen: the life they experienced on one side and the new “true” version on the other. But putting a story together about this kind of disjunctive past can be arduous.

Understandably, some feel cynical if not downright paranoid. How can they know what is real going forward? How can they integrate these new “facts” about family, origin, religion, race or fidelity? Do they have to be suspicious if they form a new relationship? As my friend said in despair, “I’m just not a snoop; it’s not in my genes.”

And the social response to people who have suffered such life-transforming disclosures, well meaning as it is intended to be, is often less than supportive. Our culture may embrace the redeemed sinner, but the person victimized — not so much. Lack of control over their destiny makes people queasy. Friends often unconsciously blame the victim, asking whether the betrayed person really “knew at some level” what was going on and had just been “in denial” about it. But the betrayed are usually as savvy as the rest of us. When one woman I know asked her husband, a closet alcoholic who drank secretly late at night, how he could have hidden his addiction for so long, he replied, “It took a lot of work.”

FREQUENTLY, a year or even less after the discovery of a longstanding lie, the victims are counseled to move on, to put it all behind them and stay focused on the future. But it’s not so easy to move on when there’s no solid narrative ground to stand on. Perhaps this is why many patients conclude in their therapy that it’s not the actions or betrayal that they most resent, it’s the lies.

In this situation, therapy can be one path to reclaiming your past. Creating a coherent narrative of one’s life has long been seen as a central goal of psychotherapy. It provides the internal structure that helps us predict and regulate future actions and feelings. It creates a stable sense of self. But if, to quote Louis Cozolino, a psychologist who writes on the neuroscience of therapy, “memory is a form of internal enactment of whatever is being recalled,” how do we retroactively create a life story out of events that were never experienced? There is a disturbing bifurcation: memory no longer corresponds to objective fact.

As a psychiatrist, I can tell you that it’s often a painstaking process to reconstruct a coherent personal history piece by piece — one that acknowledges the deception while reaffirming the actual life experience. Yet it’s work that needs to be done. Moving forward in life is hard or even, at times, impossible, without owning a narrative of one’s past. Isak Dinesen has been quoted as saying “all sorrows can be borne if you put them in a story or tell a story about them.” Perhaps robbing someone of his or her story is the greatest betrayal of all.

Anna Fels is a psychiatrist and faculty member at Weill Cornell Medical School.